With the collaboration of

The Consulate General of Peru in New York

Honoring the Amazonian Cinematography of Peru

FREE AND OPEN TO THE GENERAL PUBLIC

Welcome to the Third Contemporary Peruvian Film Showcase in New York City, celebrating the exhilarating fifty-year journey of modern Peruvian cinema. This year, the program will be dedicated to the Amazonian Cinematography of Peru. We will also be honoring the life and work of Iquitos photographer and filmmaker Antonio Wong Rengifo.

This third show is curated and produced by the photographer and filmmaker Lorry Salcedo Mitrani, with the collaboration of the Consulate General of Peru in New York and the generous support of Mrs. Martha Meier Miro Quesada, Mrs. Susana de la Puente, Mrs. Ana Maria Estrada de Rosen, and Mr. Adam Pollak.

This selection of 11 successful films from the last fifty years (documentaries, shorts and feature-length fiction) shows the creative, ethnographic, and geographic diversity of our culture, and consequently, that of the cinematographic arts in Peru.

Antonio Wong Rengifo showing a Peruvian native how to use a movie camera in the Peruvian jungle c. 1930

Antonio Wong Rengifo (b. Iquitos, Peru, March 5, 1910 – d. Iquitos, 1965) This year, the program is a celebration of Amazonian film, also known as “Iquitos Cinema,” named after the city situated in the heart of the Peruvian jungle. This movement represents a major landmark and one of the pioneering events in the history of Peruvian cinema. Due to “rubber fever” and the arrival of a wave of immigrants, mostly European, interest in moviemaking took root at the beginning of the twentieth century, simultaneously with the evolution of the U.S. movie industry in Hollywood. The towering figure of Iquitos cinema was Antonio Wong Rengifo, who was also a pioneer of the “seventh art” in Peru in general. He is mainly recognized for capturing his ideologies, aspirations, and other thoughts in his films. Along with Wong, other directors such as Werner Herzog, Amando Robles Godoy, and Francisco Lombardi continued with the evolution and presence of filmmaking in this region of Peru.

Fitzcarraldo is an obsessed opera lover who wants to build an opera house in the jungle. To accomplish this, he must first make a fortune in the rubber business. His cunning plan involves hauling an enormous river boat over a small mountain with help from the local Indians.

A young indigenous painter, Victor Churay, paints scenes from traditional Bora life and myths, using natural dyes and linens extracted from trees. In doing so, he awakens in his community a desire to revitalize their culture.

We listen to the thoughts of Priscilla as he transforms himself in front of the mirror, recalling how he went from feeling guilty for having HIV to taking off his mask and becoming an activist, overcoming his guilt and fear.

“The Bad Intentions” narrates a period in the life of Cayetana, an eight-year-old girl growing up in Peru in the early 80’s, when terrorist violence was beginning to rock the country. The story unfolds from the perspective of this precocious child, distinguished by her slightly dark and twisted personality.

Shot during the Miss Universe contest hosted by Peru in 1982, this documentary juxtaposes the glamour of the pageant with the realities of Peruvian women’s lives, while providing a critique of multinational corporate interest in the universal commodification of women. Grupo Chaski is a collective engaged in video production in Peru and is deeply committed to women’s equality and participation in society.

A child at a religious school confesses his sins while the priest recalls his own from his childhood.

A coming-out, coming-of-age tale (based on the novel by Jaime Bayly) set in a predominantly homophobic and religious Peruvian society, this film is by turns sensitive, touching, funny, alarming and, above all, highly enjoyable. We witness all the ups and downs of a young man, Joaquin (Santiago Magill), as he struggles to come to terms with his sexuality in a country where being gay is akin to being a leper, and violence towards gays is an almost daily occurrence.

Juan Torres lives in an isolated house on the banks of the Amazon River. With a wisdom learned from life itself, from nature, he tells us his story.

DocuPeru is a non-profit organization dedicated to the dissemination, documentation, production, and teaching of the artistic, technical, and professional aspects of documentary processes and products in the countries of the Andean region, based out of Peru. It emphasizes themes of education and interculturality in an effort to contribute to individual and collective development.

Antonio, a schoolteacher, lives in poverty in a small rural village in the Peruvian Andes. His luck seems to change when he wins the lottery jackpot. Antonio promises the townspeople that he will share the money and rebuild their communal farm’s irrigation system. He sets off for Lima to claim his winnings. Upon arrival, he is reunited with Alex, the son he hasn’t seen in 10 years. When Antonio’s money mysteriously disappears, he accuses his son of robbing him and returns home heartbroken. The townspeople are awaiting Antonio with excitement, but when he turns up empty-handed, they are certain he has betrayed them. And they are out for blood. 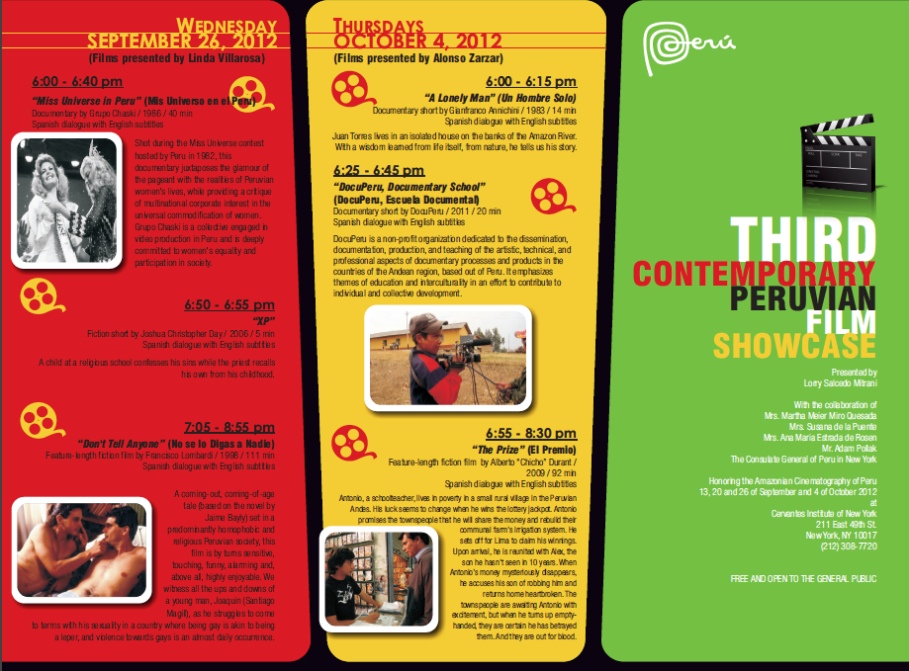